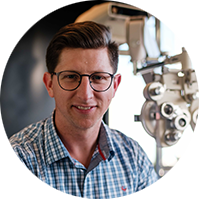 Dr Dean van der Westhuizen earned his Degree in Medicine at the University of Cape Town where he was first introduced to Cataract Surgery. This exposure inspired him to become an Ophthalmic Surgeon.

Dr van der Westhuizen is committed to providing you with the best eye care possible. After studying medicine at the University of Cape Town, he later moved on to the Groote Schuur Hospital where he specialised as an Ophthalmic Surgeon.

He became an Ophthalmic Surgeon to help people improve their vision.

Cataract Surgery with a developing interest in Cornea and Surgical Retina Conditions.